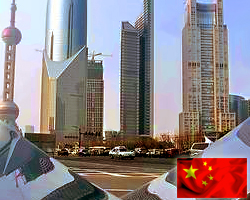 China is scheduled to release a raft of data on Monday, headlining a busy day for Asia-Pacific economic activity. On tap are April figures for industrial production, fixed asset investment, retail sales and unemployment.

Industrial production is tipped to rise 9.8 percent on year after jumping 14.1 percent in March. FAI is called higher by n annual 19.0 percent, slowing from 25.6 percent in the previous month. Retail sales are expected to spike 24.9 percent on year, down from 34.2 percent a month earlier. The jobless rate is expected to hold steady at 5.3 percent.

Thailand will provide Q1 numbers for gross domestic product; in the three months prior, GDP was up 1.3 percent on quarter and down 4.2 percent on year.

Singapore will see April figures for non-oil exports; in March, exports were up 1.2 percent on month and 12.1 percent on year, with a trade surplus of SGD5.61 billion.

Japan will release April data for producer prices; in March, prices were up 0.8 percent on month and 1.0 percent on year.

New Zealand will see April results for the Performance of Service Index from BusinessNZ; in March, the index score was 52.4.

Dollar Falls Vs Most Majors Ahead Of U.S. S&amp;P/Case-Shiller Home Price Index

U.S. Dollar Depreciates On Hopes Of De-escalation In Ukraine Conflict

U.S. Producer Prices Rise More Than Expected In May