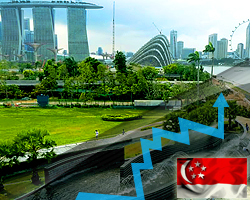 The total value of non-oil domestic exports in Singapore was down 8.8 percent on month in April, Enterprise Singapore said on Monday.

That missed expectations for a decline of 5 percent following the 1.2 percent increase in March.

On a yearly basis, non-oil exports gained 6.0 percent – also shy of forecasts for a gain of 8.0 percent following the downwardly revised 11.9 percent increase in the previous month (originally 12.1 percent).