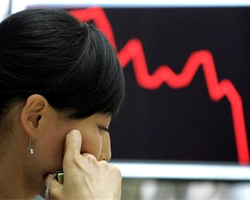 After ending last Friday’s nearly unchanged, treasuries showed a notable move to the downside during trading on Monday.

Bond prices moved steadily lower over much of the session before closing firmly negative. As a result, the yield on the benchmark ten-year note, which moves opposite of its price, rose by 3.9 basis points to 1.501 percent.

The ten-year yield added to the uptick seen in the previous session, climbing further off the three-month closing low set last Thursday.

The weakness among treasuries came as traders looked ahead to the Federal Reserve’s monetary policy announcement on Wednesday.

The Fed is widely expected to leave its monetary policy unchanged, but traders will be looking for any clues the central bank is considering tapering its asset purchases.

Last Thursday’s report from the Labor Department showed consumer price inflation reached the highest level in nearly thirteen years in May, although Fed officials have repeatedly downplayed the risks of prolonged inflation.

Traders will likely pay close attention to any changes to the Fed’s comments about inflation, with previous statements largely attributing rising inflation to “transitory factors.”

Any changes to the Fed’s projections for economic growth, inflation and interest rates are also likely to have a significant impact on the outlook for monetary policy.

A slew of U.S. economic data is scheduled to be released on Tuesday, including reports on producer price inflation, retail sales and industrial production.

The data may attract less attention than usual, however, as traders wait on the Fed’s announcement due Wednesday afternoon.

Why Grocery Innovation Is All About Share Of Stomach