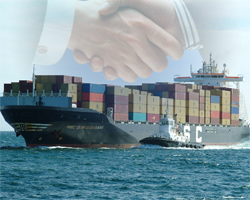 Sweden’s trade surplus increased in June from a year ago, figures from Statistics Sweden showed on Tuesday.

On an annual basis, exports grew 21.0 percent in June and imports increased 17.0 percent.

The non-EU trade balance showed a surplus of SEK 24.7 billion in June, while the trade balance with the EU revealed a deficit of SEK 14.4 billion.