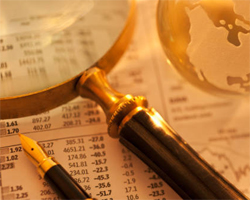 While a report released by the Commerce Department on Tuesday showed new orders for U.S. manufactured durable goods saw continued growth in the month of June, the increase came in well below expectations.

The Commerce Department said durable goods orders climbed by 0.8 percent in June after spiking by an upwardly revised 3.2 percent in May.

Economists had been expecting orders to surge up by 2.1 percent compared to the 2.3 percent jump that had been reported for the previous month.

The report showed another notable increase in orders for transportation equipment, which shot up by 2.1 percent in June after spiking by 10.0 percent in May.

Excluding the jump in orders for transportation equipment, durable goods orders rose by 0.3 percent in June following a 0.5 percent increase in May. Ex-transportation orders were expected to climb by 0.8 percent.

Increases in orders for computers and electronic products and machinery were partly offset by a drop in orders for fabricated metal products.

Meanwhile, the report said orders for non-defense capital goods excluding aircraft, a key indicator of business spending, rose by 0.5 percent in June, matching the revised increase in May.

Shipments in the same category, which is the source data for equipment investment in GDP, climbed by 0.6 percent in June after advancing by by 0.9 percent in May.

“Equipment investment is unlikely to continue to expand at that rapid pace now that it’s above its pre-pandemic trend,” said Andrew Hunter, Senior U.S. Economist at Capital Economics.

He added, “Nevertheless, the latest manufacturing surveys are consistent with growth in underlying durable orders slowing only gradually over the coming months.”