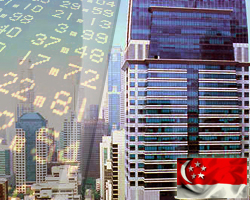 Singapore retail sales increased at a softer pace in June, data from the Department of Statistics showed on Thursday.

Motor vehicle sales rose 80.6 percent annually in June, after a 421.2 percent growth in the previous month.

Sales of watches and jewelry grew 78.4 percent yearly in June and those of department stores surged 60.0 percent.

On a monthly basis, retail sales grew 1.8 percent in June, after a 6.5 percent fall in the prior month.