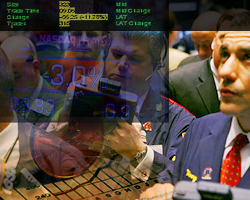 After ending the previous session firmly positive, treasuries moved back to the downside during the trading day on Friday.

Bond prices initially showed a lack of direction but slid into the red as the session progressed. As a result, the yield on the benchmark ten-year note, which moves opposite of its price, rose by 1.8 basis points to 1.260 percent.

The weakness that emerged among treasuries came as stocks on Wall Street showed a notable move to the upside on the day.

With the upward move on the day, stocks have regained ground following the sharp pullback seen during trading on Tuesday and Wednesday.

The major averages fell to their lowest levels in almost a month amid concerns about the outlook for monetary policy following the release of the minutes of the latest Federal Reserve meeting.

The Fed minutes indicated most officials were in favor of beginning to scale back the central bank’s asset purchase program later this year.

However, there was some disagreement about the timing of tapering asset purchases, and analysts have pointed out that some disappointing economic data has been released since the July meeting.

Uncertainty about the outlook for monetary policy may lead traders to keep a close eye on upcoming economic data ahead of the Fed’s next meeting in September.

Unfortunately, the economic calendar for next week is relatively light, although traders are likely to keep an eye on reports on durable goods orders and personal income and spending.