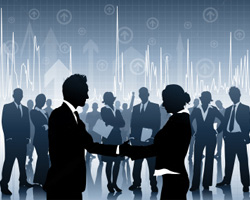 The decrease was mainly driven by a 2.7 percent fall in manufactured goods sales and a 2.9 percent drop in food consumption.