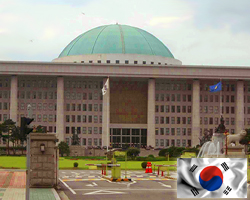 South Korea’s gross domestic product climbed a seasonally adjusted 0.8 percent on quarter in the second quarter of 2021, the Bank of Korea said in Thursday’s final reading.

That was up from 0.7 percent in July’s advance estimate and it follows the 1.7 percent in the previous three months.

Real gross national income increased by 0.1 percent in the second quarter compared to the previous quarter.

Construction investment contracted by 2.3 percent, as building construction and civil engineering both decreased. Facilities investment grew by 1.1 percent, driven by an increase in transportation equipment.

Exports fell by 2.0 percent, due to decreases in motor vehicles and LCDs. Imports were up by 2.8 percent, owing to increased imports of basic metals and chemical products.

Nominal GNI rose by 2.4 percent in the second quarter of 2021 relative to the quarter before, increasing more than nominal GDP (1.9 percent) as net factor income from the rest of the world increased.

Real GNI grew by 0.1 percent compared to the previous quarter, increasing less than real GDP (0.8 percent) as the terms of trade worsened. The GDP deflator increased by 1.6 percent year on year.

The gross domestic investment ratio (gross capital formation/GNDI) was 31.7 percent, 0.7 percentage points higher than in the previous quarter, due to an increase in facilities investment.

Also on Thursday, Statistics Korea said that consumer prices in South Korea were up 2.6 percent on year in August. That was unchanged from the July reading, although it exceeded expectations for 2.3 percent.

On a monthly basis, consumer prices rose 0.6 percent – also beating forecasts for 0.3 percent and up from 0.2 percent in the previous month.