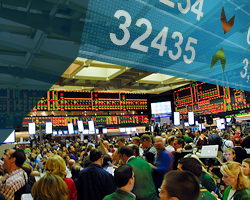 Germany’s manufacturing sector expanded at the slowest pace in eight months in September, due to ongoing supply disruptions and rising prices, while the service sector growth lost steam after a strong rebound as economic activity recovered after the Covid-19 pandemic, results of a survey showed Thursday.

The flash purchasing managers’ index for the factory sector fell to 58.5 from 62.6 in August, preliminary results of the latest Purchasing Mangers’ survey by IHS Markit showed. Economists had forecast a score of 61.5.
The manufacturing output index dropped to a 15-month low of 53.8 in September, thanks to supply bottlenecks that damped demand.
Orders grew at the weakest pace since July last year. Semiconductor shortages led to lower demand from the automotive sector.
The flash services PMI dropped to a four-month low of 56.0 from 60.8 in August. Economists had predicted a reading of 60.2.

The flash composite PMI, which combines manufacturing and services, fell to a seven-month low of 55.3 from 60.0 in the previous month. Economists had expected a score of 59.2.
In the third quarter, the composite PMI averaged 59.2 versus 57.4 in the three months to June. The latest reading was the highest in ten-and-a-half years.
Overall new business growth was the weakest since April with foreign business registering the slowest growth thus far this year.

The survey data was collected from September 13 to 22.
Continued pressure from energy, material, labor and transportation costs kept both input and output price inflation near record high levels, despite some easing. Overall input price inflation slowed to a four-month low.

Output price inflation accelerated in the manufacturing, while it eased to a four-month low in the services sector.

Business confidence was damped by concerns over supply chains and rising inflationary pressures and hit its low since December last year. Backlogs of work increased sharply in the manufacturing sector.
Meanwhile, private sector employment grew for a ninth month in a row, but the rate of increase slowed for a second straight month in both manufacturing and services. Overall jobs growth was the smallest since May.
“September’s flash PMI survey showed a notable slowdown in the rate of growth of the German economy, in a sign that activity is beginning to level off after rebounding sharply over the summer,” IHS Markit Associate Director Phil Smith said.

“However, despite the slowdown in September, the pace of economic growth in the third quarter still looks to have surpassed the 1.6 percent expansion seen in the three months to June.”

Final figures for the September survey are set to be published on October 1 for manufacturing, and on October 5 for services and composite indicators.