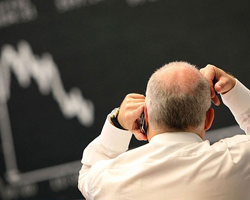 Treasuries moved to the downside during trading on Tuesday, extending the sell-off seen over the past several sessions.

Bond prices regained ground after coming under pressure in early trading but remained firmly negative. Subsequently, the yield on the benchmark ten-year note, which moves opposite of its price, climbed 5 basis points to 1.534 percent.

The ten-year yield moved higher for the sixth consecutive session, ending the day at a three-month closing high.

Treasuries extended the downward move seen since the Federal Reserve signaled plans to begin scaling back its asset purchases in the near future.

Also contributing to the continued weakness among treasuries, Federal Reserve Chair Jerome Powell warned members of the Senate Banking Committee about upside risks to inflation during testimony this morning.

In prepared remarks, Powell predicted inflation will remain elevated in the coming months before moderating.

“As the economy continues to reopen and spending rebounds, we are seeing upward pressure on prices, particularly due to supply bottlenecks in some sectors,” Powell said.

He added, “These effects have been larger and longer lasting than anticipated, but they will abate, and as they do, inflation is expected to drop back toward our longer-run 2 percent goal.”

Powell warned supply bottlenecks, hiring difficulties, and other constraints could prove to be greater and more enduring as the economic reopening continues, posing upside risks to inflation.

“If sustained higher inflation were to become a serious concern, we would certainly respond and use our tools to ensure that inflation runs at levels that are consistent with our goal,” the Fed chief said.

Meanwhile, the Conference Board released a report unexpectedly showing a continued deterioration in U.S. consumer confidence in the month of September.

The Conference Board said its consumer confidence index tumbled to 109.3 in September from an upwardly revised 115.2 in August.

The decrease surprised economists, who had expected the index to inch up to 114.8 from the 113.8 originally reported for the previous month.

The Treasury Department also revealed that this month’s auction of $62 billion worth of seven-year notes attracted modestly below average demand.

A report on pending home sales may attract attention on Wednesday along with more remarks by Fed officials, including Powell.