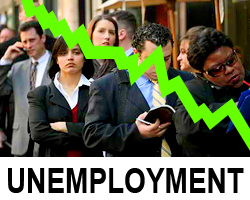 First-time claims for U.S. unemployment benefits unexpectedly increased for the third straight week in the week ended September 25th, according to a report released by the Labor Department on Thursday.

With the unexpected increase, jobless claims climbed further off the pandemic-era low of 312,000 set in the week ended September 4th and reached their highest level since early August.

She added, “However, we expect initial claims to return to their downward path in the weeks ahead as the economy resumes stronger momentum in Q4.”

The Labor Department said the less volatile four-week moving average also crept up to 340,000, an increase of 4,250 from the previous week’s unrevised average of 335,750.

Meanwhile, the report said continuing claims, a reading on the number of people receiving ongoing unemployment assistance, slipped by 18,000 to 2.802 million in the week ended September 18th.

Next Friday, the Labor Department is scheduled to release its more closely watched report on the employment situation in the month of September.