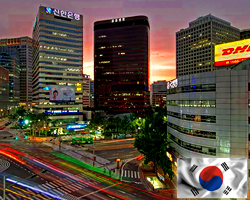 Overall consumer prices in South Korea were up 2.5 percent on year in September, Statistics Korea said on Wednesday.

That was down from 2.6 percent on year in August, although it did beat forecasts for 2.25 percent.

On a seasonally adjusted monthly basis, overall inflation was up 0.5 percent after gaining 0.6 percent a month earlier. Core CPI was down 0.1 percent on month after rising 0.3 percent in August.