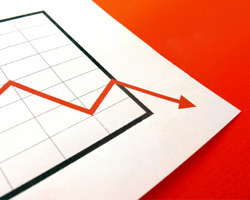 After ending the previous session modestly lower, treasuries showed a notable move to the downside during trading on Tuesday.

Bond prices came under pressure in early trading and remained firmly negative throughout the day. As a result, the yield on the benchmark ten-year note, which moves opposite of its price, climbed by 4.8 basis points to 1.529 percent.

The weakness among treasuries came amid a rally on Wall Street, with stocks showing a substantial rebound after falling sharply on Monday.

Further reducing the appeal of treasuries, the Institute for Supply Management released a report showing activity in the U.S. service sector unexpectedly grew at a slightly faster pace in the month of September.

The ISM said its services PMI inched up to 61.9 in September from 61.7 in August, with a reading above 50 indicating growth in the service sector. Economists had expected the index to edge down to 60.0.

“The slight uptick in the rate of expansion in the month of September continued the current period of strong growth for the services sector,” said Anthony Nieves, Chair of the ISM Services Business Survey Committee.

He added, “However, ongoing challenges with labor resources, logistics, and materials are affecting the continuity of supply.”

A separate report released by the Commerce Department showed the U.S. trade deficit widened by much more than expected in the month of August.

Trading on Wednesday may be impacted by reaction to payroll processor ADP’s report on private sector employment in the month of September.

*UK Chancellor Announces Cash Grants Of Up To GBP 3,000 Per Month For Closed...

Downturn In Austria Manufacturing Sector Slows In May